Today, everyone wants a new career or opportunity, but unless they have a great coach to push them, most are merely dreaming instead of achieving. Unfortunately, good coaches are either too expensive or unavailable. However, what if one of the leading voices in restaurant growth could empower you to play that role yourself?

Now, a method called “self-coaching” is available to all with the publication of Take Charge Of You: How Self Coaching Can Transform Your Life and Career,  which is for sale March 2022 by David Novak, cofounder & former CEO and Chairman of Yum! Brands. An excerpt is below.

Novak is Founder and CEO of David Novak Leadership, the parent organization to five nonprofits dedicated to developing leaders at every stage of life, from ages 5 to 65. He is also the host of the top-ranked business podcast, How Leaders Lead with David Novak. He also has highly respected and critically acclaimed books include #1 The New York Times bestseller Taking People With You: The Only Way to Make Big Things Happen, The Education of an Accidental CEO: Lessons Learned from the Trailer Park to the Corner Office and his latest parable, O GREAT ONE! A Little Story About the Awesome Power of Recognition.

Novak has been recognized as “CEO of the Year” by Chief Executive magazine, one of the world’s “30 Best CEOs” by Barron’s, one of the “Top People in Business” by FORTUNE and one of the “100 Best-Performing CEOs in the World” by Harvard Business Review. He received the prestigious 2015 Horatio Alger Award for his commitment to philanthropy and higher education and became a lifetime member of the Horatio Alger Association of Distinguished Americans. He is the recipient of the 2012 UN World Food Program Leadership Award for Yum! Brands World Hunger Relief effort that raised awareness, volunteerism and funds to address the global problem. He also received the national 2008 Woodrow Wilson Award for Corporate Citizenship. 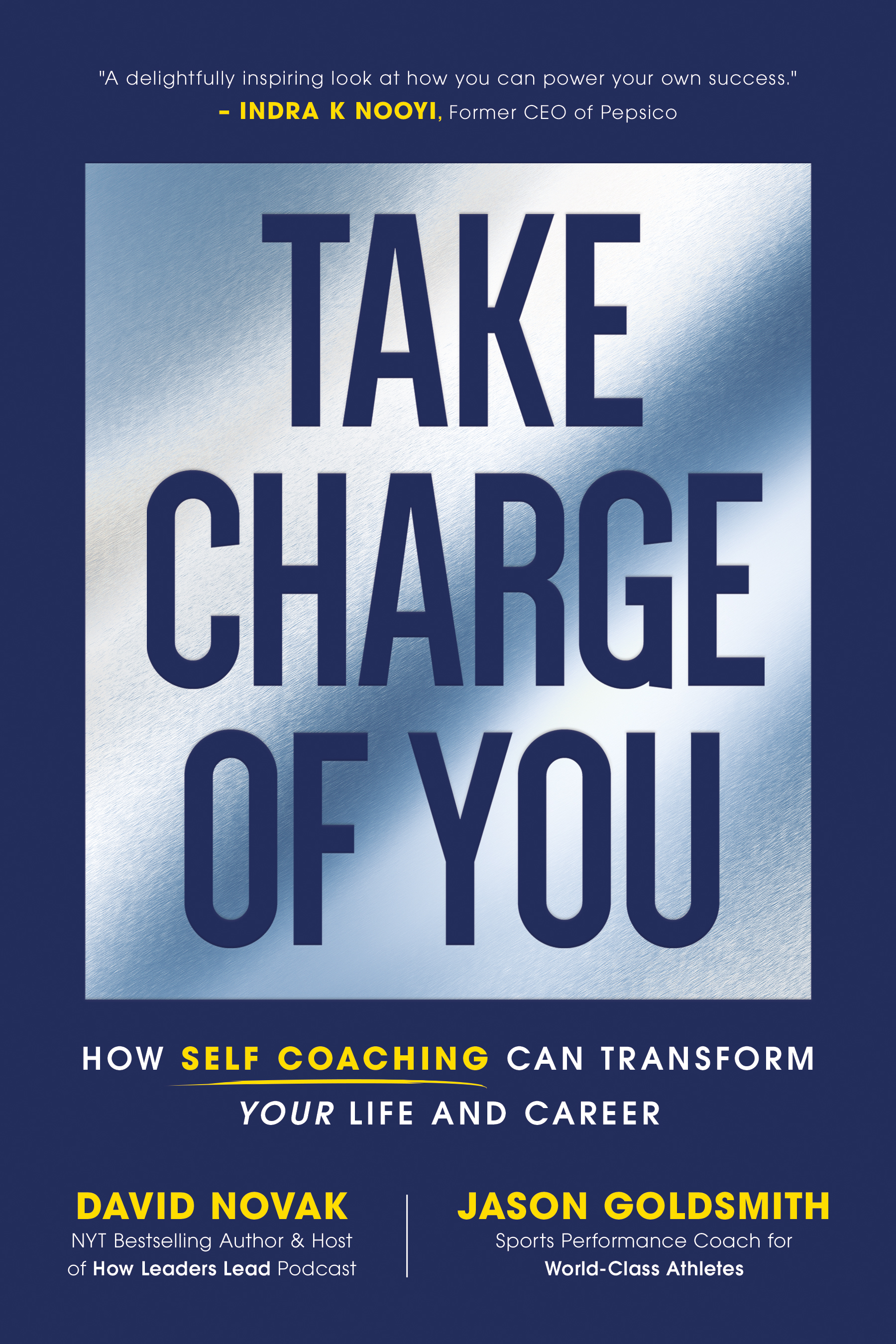 In 1997 I was working at PepsiCo, heading up two of its three restaurant brands, KFC and Pizza Hut, when a decision was made to spin-off the company’s restaurants to create an entirely new company. The decision had been a well-kept secret, so when Roger Enrico, PepsiCo’s CEO, called me into his office to tell me the news, I was caught by surprise. I was even more surprised—and not in a good way—when he told me I was going to be “co-leader” of the new company along with the head of PepsiCo’s third restaurant brand, Taco Bell.

“Co-leader” wasn’t exactly what it sounded like. The other guy was going to be named CEO, while I would be president and second in command. Something about the idea didn’t sit right with me, but I didn’t say anything right away. And I couldn’t ask anyone for advice. The new management team was to remain a secret until PepsiCo was ready to announce it publicly, which meant I had to navigate the situation all on my own.

I figured I had to give Enrico’s idea a chance. The head of Taco Bell was relatively new to his position, so I suggested we meet for dinner to get to know each other better. When Enrico pitched the co-leader idea to me, he had positioned this guy as having more financial capability than I did, which was why he would be CEO and I would be his second. But as we talked, I discovered that wasn’t really true. He had previously worked at a convenience store chain and been part of the management team that brought the company out of Chapter 11. But I learned that his role had been in operations, while someone else oversaw the financial side. There were other things that gnawed at me, too. He didn’t have as much experience as I did in the restaurant business, and he didn’t seem to share my passion for it, either. He was more interested in talking about the money we would make. We had different backgrounds, but by the end of our conversation, I was convinced I could do the job just as well as he could—if not a whole lot better.

Of course it’s one thing for me to think that. It’s another to get other people to agree. After the meeting, I started working on ways to convince Enrico that I should get the top job instead. Enrico wasn’t happy that I hadn’t accepted his co-leader offer right away, and word got back to him that I was working on other options. Not long after, I got a call from the head of HR.

“David, if you’re not careful, you’re going to get fired,” he told me.

“If you guys want to fire me, then go ahead and fire me,” I shot back.

I was upset and my response reflected it. As soon as I hung up, I realized I was in deep trouble. If you go up against the boss, only one person wins and it isn’t you. I knew if I was going to get what I wanted, I needed to approach things with a different mindset.

I knew Enrico didn’t want to fire me. He valued my expertise, and besides that we were friends. But I needed to smooth things over, and to do that, I needed to let him know how much I appreciated all the things that he’d done for me. I also needed to show him that if he had to choose between the head of Taco Bell and me, I was the obvious choice. So I put together a thirty-page presentation and set up a meeting.

It was a holiday when we met, and everyone had the day off, leaving the office oddly quiet. I began by apologizing to Enrico for acting so emotionally and explaining that I had done so because the situation wasn’t sitting right in my heart. He knew I was a passionate person, so he accepted that. And that allowed me to make my case.

At the end of my presentation I said to Enrico, “Okay, you don’t think I can be CEO. I think I can, but I’ll accept that I don’t have as much financial experience as you’d like. So all I ask is that you give me someone I can learn from.” I suggested a few names of people who, in my opinion, would be stronger CEOs than the head of Taco Bell. One of them was Andy Pearson, a former president of PepsiCo and renowned professor at Harvard Business School. I knew that Pearson had a deep well of experience, which would complement my own, and that, at the age of seventy-two, he would be ready to let me take the reins sooner rather than later. Enrico listened and agreed. Pearson came on board as CEO, and I accepted the position of president. What’s more, Pearson became one of my closest friends and allies. Even though he had a three-year contract as CEO, he stepped aside after we had worked together for just two years. That’s when I was named CEO of Yum! Brands, the largest restaurant company in the world.

This might never have happened if I hadn’t been able to coach myself through that crucial moment. I could have blown it so easily. When the head of HR told me I could get fired, he wasn’t kidding. That’s how angry Enrico was at me.

It might sound strange, but years later, after I retired from my position as CEO, I used similar skills to coach myself through a cancer diagnosis. It’s a story I’ll talk more about later in this book, but I mention it now because self coaching really helped me through it. It helped me accept the reality of the situation and humbly admit that so much of it was outside my control—but also to realize that I wasn’t completely powerless. With that mindset, I was able to step back and decide what I wanted to happen, and learn everything I could about how to give myself the best chance of surviving. Then I worked toward that, through good days and bad, until I was in remission.

Printed with Permission From Ideapress Publishing.

David Novak is the Co-Founder, retired Chairman and CEO of Yum! Brands, Inc. Under his 17-year leadership, Yum! Brands doubled in size to over 45,000 restaurants and grew from a $4b to a $32 Billion market cap. He is Founder and CEO of David Novak Leadership, the parent organization to five nonprofits dedicated to developing leaders at every stage of life, from ages 5 to 65. Novak is also the host of the top-ranked business podcast, How Leaders Lead with David Novak.