Revenue Management Solutions just released its Q1 2022 consumer sentiment survey, and it appears the industry’s concerns have moved beyond the pandemic.

A year ago, the restaurant industry was hopeful as it anticipated the vaccine rollout. Consumers, tired of social distancing and ready to shed their ‘pandemic pod,’ were eager to get out. Restaurants were keen to have them.

As we enter Q2 2022, it’s a different view. Masks have come off, and concerns over catching COVID have eased. Vaccine rates are stable at 74 percent, a jump from a 17 percent vaccination rate reported in Q1 2021 and even surpassing the 60 percent of respondents who were or planned to get vaccinated.

But the industry has a new problem: inflation.

RMS just released our latest findings around consumer sentiment for Q1, which revealed, among other things, that price is starting to matter—and not by an insignificant amount.

According to RMS’ findings:

The sentiment has changed rapidly. Just three months ago, when asked “what is causing dissatisfaction from the QSR experience?” consumers had other concerns, ranking price fourth behind long wait times, order inaccuracy and poor customer service. For table service, price ranked third as the reason for their dissatisfaction, with long wait times and poor customer service coming in ahead.

So how does this feeling show up for brands? Our researchers dug deeper and found that customers are reporting changes in their behavior, with indicators showing signs of trading down and, in some cases, trading out.

When looking at YOY, guests reduced their frequency across all dining segments, with just 21 percent reporting they ordered “more or much more” from a drive-thru than in the past month. For fast-casual, the picture was grimmer: just 13 percent ordered more; worse still for dine-in, with only 12 percent of consumers ordering more.

Similarly, guests who ate out at least once during the week slumped in all categories except dine-in (approximately 70 percent reported just one weekly visit, compared to 40 percent in Feb. 2021.) 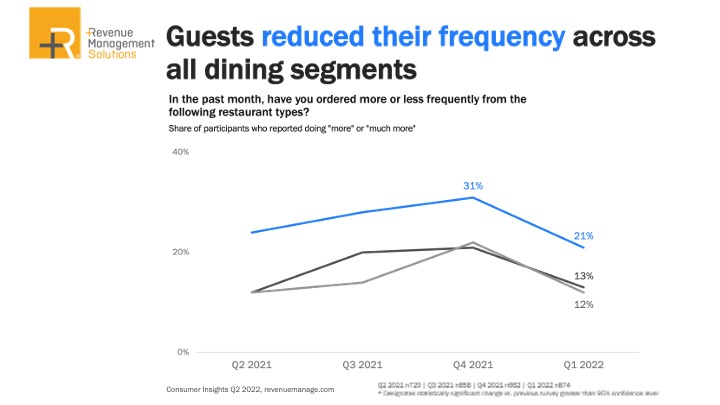 Consumers still want the experience of dining out; they just can’t justify doing so as often as they’d like, particularly given current inflationary prices. Among those surveyed, 37 percent reported spending less of their disposable income on restaurants. Those that still wish to enjoy (and pay) for food away from home are exercising a thoughtful, thrifty approach: nearly half (46 percent) report ordering less from restaurants; about one in three consumers order less expensive items or choose less expensive restaurants.

Drive-thru visits, the stalwart off-premises champ during the pandemic, are even in flux, dropping to 80 from 86 percent in Q4 2021 (though up slightly from 73 percent in Feb. 2021). Delivery use is also down to 53 percent from 57 percent, a decline likely caused by ongoing fatigue of delivery surcharges.

Look no further than the sacred coffee shop purchase for the final word on consumers’ reaction to climbing prices. Frequency took a dive in Q1, with 15 percent reporting that they visited a coffee shop “more or much more” in Q1 2022 compared to 22% in Q4 2021.

The pressure is not likely to let up soon. According to the US Department of Agriculture, the food away from home index rose 6.8 percent over the past year. Though not the first time inflation rose at record-setting levels YOY—it is the first time since 1981.

As the industry struggles through its next challenge, RMS Senior Vice President Richard Delvallée offers a reminder for managing surging costs: “Remember, the goal is to protect traffic and maintain healthy margins. A straight five-percent increase may appear the only way to weather these tough times, but as customers get more price-sensitive, too big a leap could push them to your competitors.”

Jana Zschieschang is Chief Marketing Officer of Revenue Management Solutions, LLC, a global enterprise providing patented, data-driven solutions and services that drive sales and profitability for over 100,000 restaurants in more than 40 countries and 20 languages. In her role, she designs global marketing and communication strategy and implementation at each of RMS’ offices in Tampa, Tokyo, Singapore, London and Paris. Before being named CMO, Zschieschang was RMS President of EMEA, where she founded RMS’s London office, quadrupled the staff and added dozens of new clients.