This edition of Modern Restaurant Management (MRM) magazine's Research Roundup features the surge in online ordering, early returns on restaurant recovery and what customers want and expect from restaurants.

From February to April Upserve has seen a 169 percent increase in restaurants using online ordering. They are seeing an uptick in online orders in all types of geographic areas. In large suburbs, online ordering has grown 3,868 percent since February.

Restaurant recovery is slow but building, As of April 8, 27 percent of restaurants showed an upward sales trend over the previous week, according to Upserve’s data.

Many restaurants who already offered online ordering pre-COVID were able to avoid having to close altogether, saving them up to a month’s worth of revenue. While they did see a drop in sales, they did not ever experience a 100 percent revenue loss.

According to Black Box Financial Intelligence, the number of restaurants reopening their dining rooms has steadily increased in recent days. As of Saturday, May 9, on average almost 30 percent of the restaurants operated by the companies that participated in the firm's Restaurants Recovery Sales Flash survey opened their dining rooms in some capacity.

From the recently published Workforce Response to COVID-19 Surve, despite many companies beginning to bring back employees from furlough, of those people employed by chain restaurants back in January, only 45 percent of them remain actively employed today on average.

Most companies are expecting to re-hire or bring back employees from furlough at the same base wages and salaries they had before. Almost half of restaurant companies said they are adjusting their bonus criteria or performance goals in response to the pandemic.

Companies are focusing on ways to guarantee the safety of their employees and guests. Some of the most common measures taken include requiring all employees to wear masks and gloves, adding plexi-glass shields to customer facing stations such as host/hostess stands and counters, taking temperature of employees, removing tables and providing hand sanitizer throughout the restaurants. A few companies are planning to stop receiving cash and some even plan to discontinue the use of physical credit cards.

New on-premise consumer research from Nielsen CGA, focused specifically on states where the channel has opened up again in one form or another – Georgia, Tennessee, Florida and Texas.

Some key insights from this survey of 1,600 consumers in the aforementioned four states, from May 9-11:

Of the 71 percent who have not returned to eat or drink, we asked why they had not visited the on-premise yet. 48 percent said they need more time to feel comfortable visiting these places, 47 percent said they do not feel safe going out, 47 percent worried about the proximity of strangers and 24 percent were self isolating.

Regarding what consumers would like to see inside venues upon reopening, the top options were additional hygiene programs taking place in outlets (51 percent), having fewer tables or patrons within venues to accommodate social distancing (48 percent) and bar/restaurant staff wearing protective gear such as masks or gloves (45 percent).

Over the past two weeks, 53 percent of consumers are drinking the same amount, while 28 percent are drinking more. This leaves just 20 percent drinking less.

Azurite Consulting released a detailed survey about business post COVID. A  section of that survey of 3,500 Americans that dealt with restaurants. 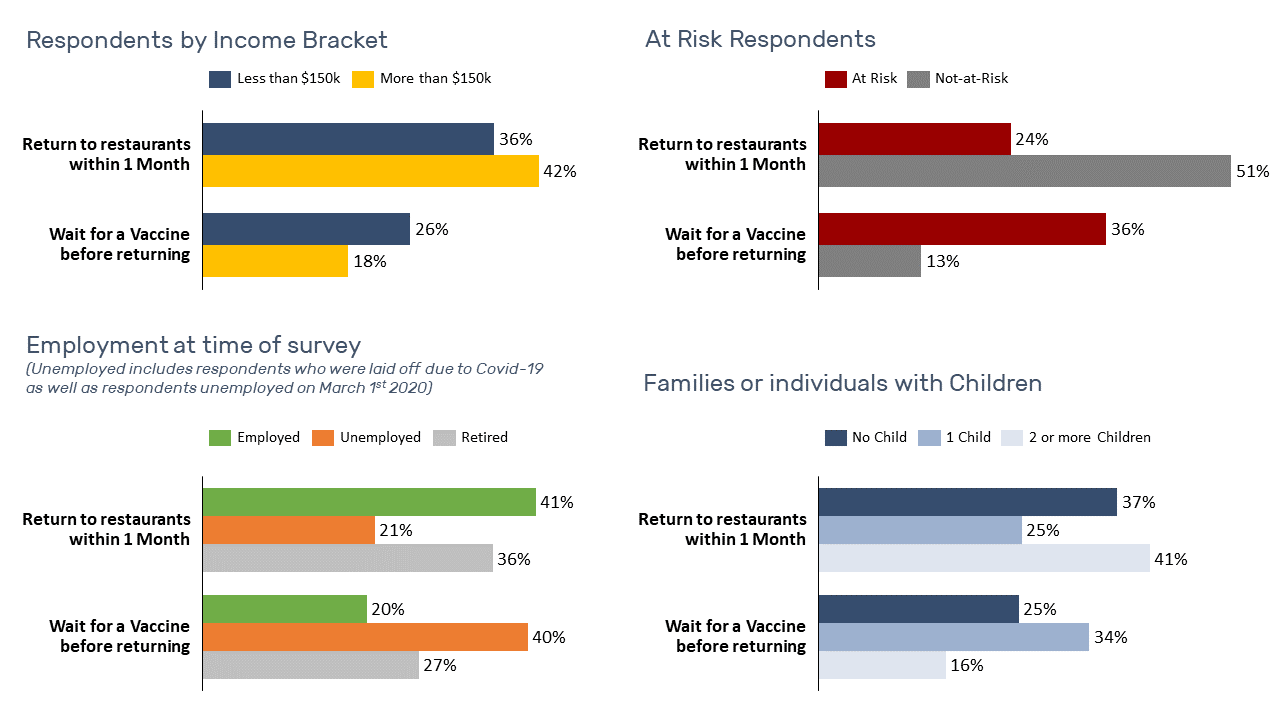 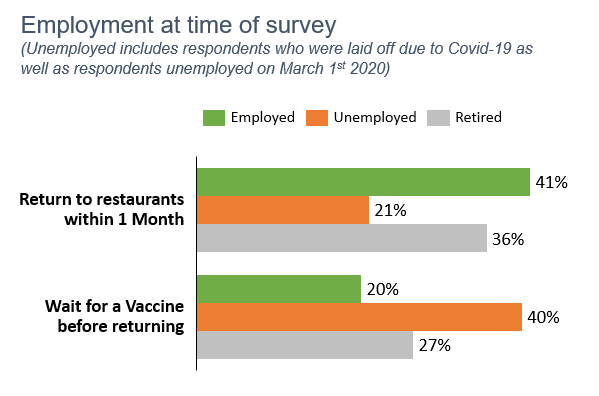 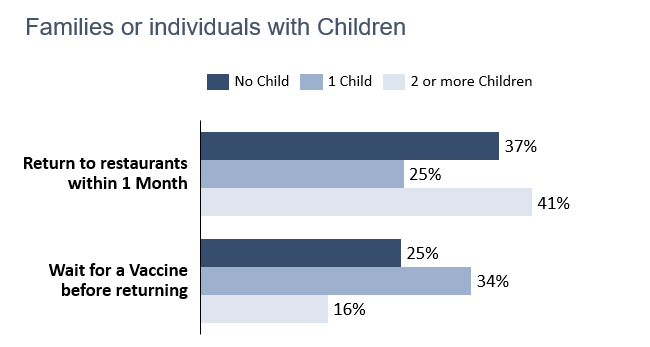 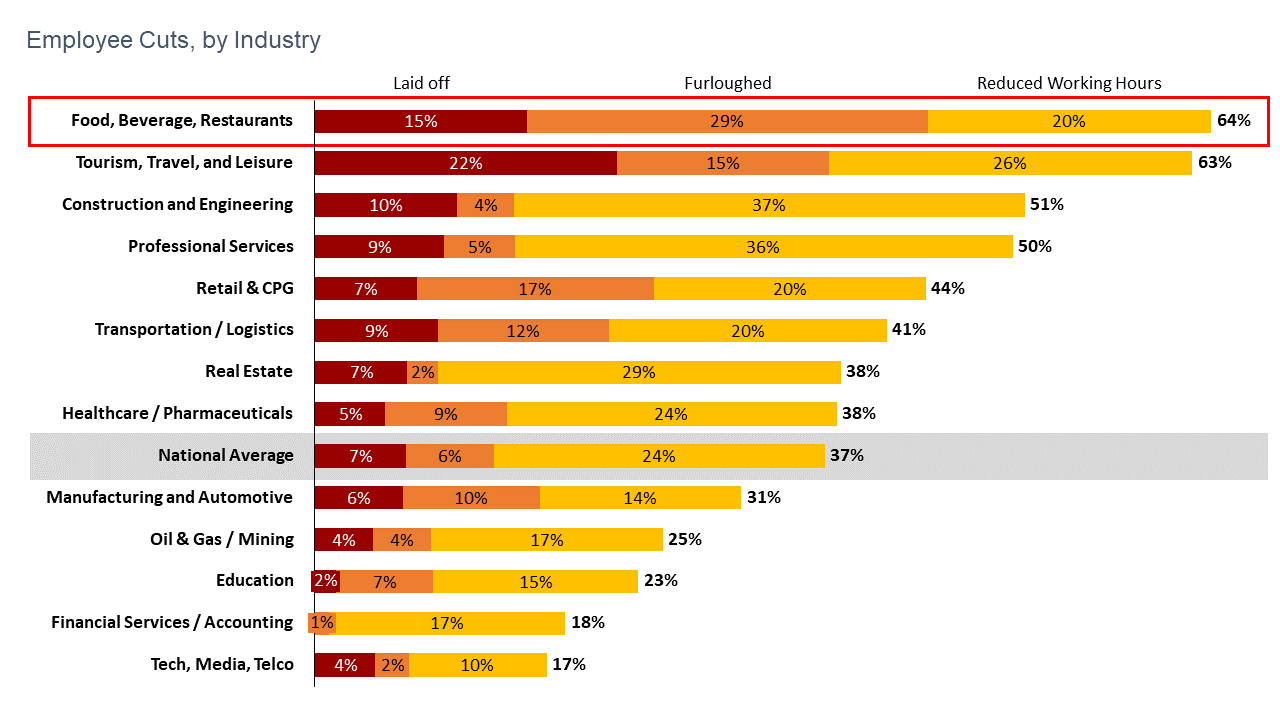 New findings from Sense360's research on COVID-19 reveal consumers on their opinions of social distancing and what types of retailers they want to see reopened. Here is an overview:

Social Distancing policies are expected by most people at different points throughout the process of procuring food at retail or restaurants, specifically while waiting in line to pay or to get into the establishment due to capacity management.

About one third of people live in parts of the country where restrictions are still in place. Of the remaining two thirds, most still have only limited businesses open and 14 percent of them say they're going to continue to shelter in place despite the loosening of restrictions.

They asked people the establishments they expect should be re-opened across four types of retailers/locations:

Health & Body: About 40 percent think that barber shops and salons should open

Large Public Gatherings: Less than 20 percent of people believe that large public gatherings should be allowed, and only one in six think that classrooms and schools should re-open.

Outdoor Spaces: More than 1/2 believe that parks and trails should be re-opened.

One sixth of people believe that none of these locations should be re-opened.

People are most inclined to believe that outdoor spaces and personal care locations like salons and elective medical services should be able to reopen.

BentoBox polled 500 Americans about their views on visiting restaurants post-COVID. Among the highlights:

Some of this data hints at how restaurants might need to adapt going forward, by limiting diners’ encounters with waitstaff, relying on contactless payments, encouraging digital pre-ordering, and potentially offering single-use cutlery.

Architecture and design firm, NELSON Worldwide team created the following graphic to better illustrate the journey customers will be faced with during and after the pandemic. 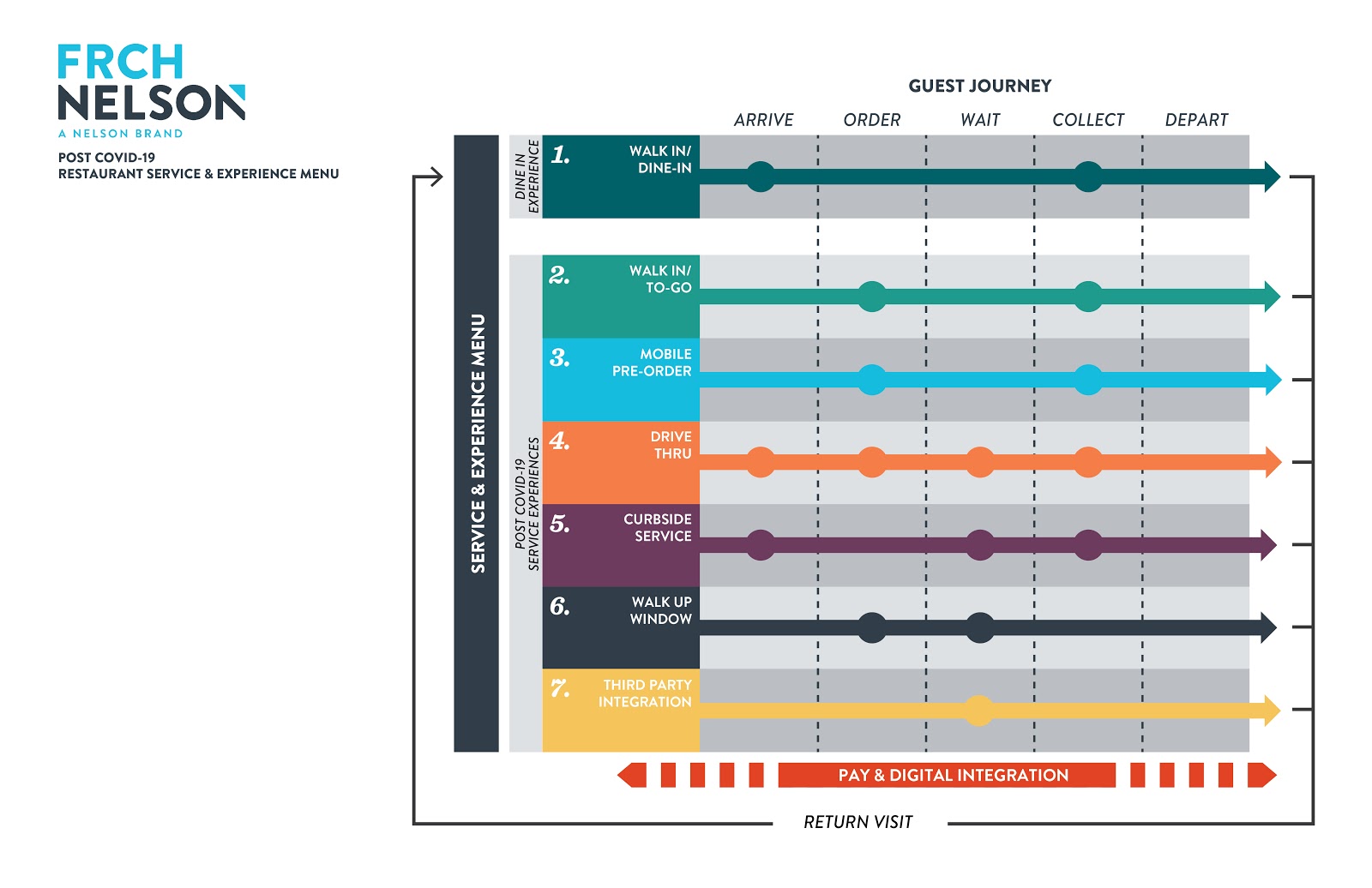 As consumers search for fun ways to stay connected while stuck at home, Amobee is releasing a study that assesses how people are engaging with beer and wine content online.

What Happened to Breakfast?

Pre-COVID-19, fast food breakfast was all the rage. How has the pandemic impacted this? Foot traffic analytics firm Placer.ai, compared the major quick-service restaurants with a focus on breakfast. They found traffic decreased across the board from 8 a.m. to 11 a.m. but, looking at specific times throughout the day paints a different picture for different brands, and in some cases, emphasizes their true strengths.

Wendy’s was the only brand that saw a significant increase during the morning rush. Dunkin’ Donuts, Starbucks, Panera, McDonald’s, and Burger King all saw a decreased appetite for breakfast as fewer people ventured out.

A link to the full report can be found here.

Shift4 Payments detected a steady increase in merchant transaction volumes nationally as compared to the lows observed in March.

Shift4’s data reveals that the restaurant industry experienced a 45 percent increase in payment transactions in the last seven days versus the week of March 22nd, when volumes plunged to their lows. With travel still severely limited, transaction volume for hotels continues to remain muted with only a 3.9 percent increase nationally, yet these levels have stabilized and are not decreasing further. Shift4’s index for all industries outside of hospitality shows an impressive 62 percent increase during April and into May, suggesting many businesses are beginning to conduct commerce again.

States leading the increase in payment transactions since March lows include Oklahoma (up 189 percent), Texas (up 87 percent) and Florida (up 54 percent). Shift4 Payments anticipates this data will continue to evolve as states take further steps to reopen their economies.

“We’re very encouraged and pleased to see the transaction activity of our merchants pick up during April and into May,” said Jared Isaacman, CEO of Shift4 Payments. “With restrictions beginning to ease nationwide, we see meaningful signs of hope that the worst of the pandemic is behind us and we can steadily turn our attention to helping these businesses, especially in the hospitality industry, get back on their feet.”

What Consumers Want to Do

As states “open up,” consumers are envisioning activities for the time social-distancing rules get lifted.

“I’ve been telling friends that after three months of social-distancing,“ said Robert Passikoff, president of Brand Keys, “The first thing I want is to sit at a restaurant table and have someone serve me a turkey club and fries.”

Apparently, a majority of coronavirus captives agree. Sixty-two percent (62 percent) of 1,000 survey respondents indicated the first thing they’ll do is eat in a restaurant. This was the top craving identified in the sixth wave of the Consumer Coronavirus Behavior research conducted by TheCustomer (www.thecustomer.net), Brand Keys (www.brandkeys.com), the New York-based brand loyalty and customer engagement consultancy, and Suzy (www.suzy.com) the on-demand research software platform.

“It’s both a social release and a domestic relief from having to prepare your own meals or ordering in,” noted Mike Giambatista, publisher of TheCustomer, the weekly newsletter covering intelligence from the customer insight universe. “Three months ago, cooking and baking were both a novelty and a necessity. Now they’ve become a chore. People are reminiscing about eating out, which is great news for the restaurant industry since, next to the Federal government, restaurants are the second-largest employer in the United States.

After a meal out, 58 percent of the sample expressed a desire to visit a barber shop or beauty salon, with an equal number of respondents wanting to go shopping. “There’s been an enormous jump in DIY haircut videos on the Internet,” said Passikoff. “And an equal number of posts with people sharing some truly awful amateur home-cuts. As to shopping, with virtually every closed down, consumers just want to go somewhere that’s not a pharmacy or grocery store.”

“The trade-offs are interesting,” said Giambatista. “Although some are self-evident, given the circumstances, they are completely comprehensible.” Consumers are twice as likely to do the following:

In Babbage Pulse report, 63 percent of Americans believe that shelter-in-place orders are still necessary while only 3 percent believe that that they are not necessary. However, 56 percent of respondents are most looking forward to going to a restaurant with their family. The next largest category was 43 percent looking forward to going to a grocery store that is properly stocked. 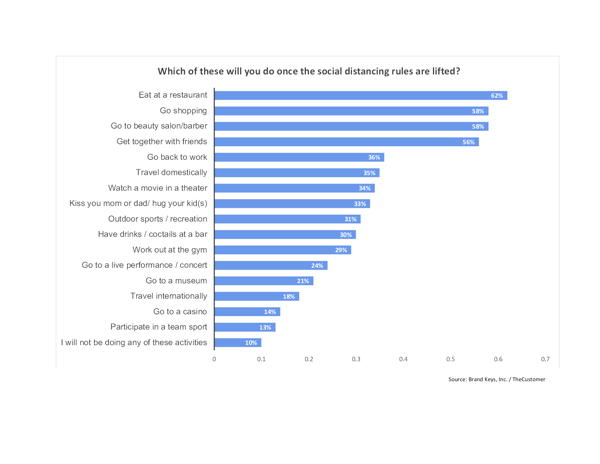