This edition of MRM Research Roundup features news of The Chicken Wars, the best cities for chefs and a cocktail hangover index.

January was encouraging for the restaurant industry. With same-store sales growth of -4.9 percent and traffic growth of -12.2 percent, it was the best performance for restaurants since the beginning of the pandemic almost a year ago, according to The Restaurant Guest Satisfaction Snapshot produced by data from Guest Intelligence™, a Black Box Intelligence Product.

This is good news for an industry that struggled the last two months of 2020, as sales and traffic growth worsened compared to the COVID-era peak achieved in October. Likely contributing to some of the consumer pent up demand for restaurant spending was a combination stimulus check distribution, a sense of optimism from turning the page on 2020 and the increased prospect of additional government aid soon.

There also continues to be resiliency from restaurant operators, and perhaps some goodwill from restaurant guests as well. Despite all the challenges being faced by the industry, guest sentiment as measured through online reviews and comments remains more positive than it was a year ago for the key attributes of the restaurant experience.

Guest sentiment based on restaurant food became 3.8 percentage points more positive in January year over year. However, less than 50 percent of all reviews centered around food were classified as positive during the month, while the industry had consistently been achieving over 50 percent positive food sentiment during the previous five months. As sales and traffic experienced an upswing in January, it may have become harder to keep up in terms of consistency and execution, especially considering the reduced staffing levels experienced by most in the industry.

The story is similar when analyzing restaurant service. The good news is that guests continue to rate their service experiences most positively than they did a year ago (before COVID had hit at a significant national level). Although over 50 percent of service-centered reviews were classified as positive during January, the month also experienced the lowest percentage of positive service mentions since July. Like food, an increased pace of business may also be causing pressures on the service model of restaurants.

Since the summer, an emerging theme in online social data related to restaurants was how ambiance net sentiment started to improve year over year. But it was not the usual components that usually come up when discussing restaurant ambiance that were driving this improvement in guest sentiment. Rather, it was something as unglamorous as cleanliness that guests cared about more than anything else. Given that a global pandemic had just hit our country it was obvious these were not normal times and guests were rightfully hyper-focused on their safety when visiting restaurants.

Nine months into the pandemic, guests have learned to live and adapt to their new conditions. Has their perception on restaurant ambiance changed? Have they gone back to focusing on other, more elevated aspects of the restaurant’s atmosphere when they discuss their restaurant experiences online?

The good news is overall, restaurants keep doing a good job at implementing and executing on their policies to keep their restaurants clean and safe as we continue to face this health crisis. Instead of restaurants showing fatigue due to the length of the pandemic and safety practices slipping up, guests continue to be increasingly satisfied with what they see once they decide to dine out or order some food for off-premise consumption. Cleanliness and safety continue to be at the forefront of their concerns, and for the most part restaurants are succeeding in meeting those expectations.

To further illustrate the relationship that exists between restaurant sales and guest sentiment at the local level, the top 10 major markets based on their same-store sales growth in January had guest sentiment 12.3 percentage points more positive based on restaurant food than the 10 markets with the worst sales growth results. The differences were also 12.3 percentage points based on ambiance sentiment and 9.6 points based on service. Especially under this environment, in which market performance is largely driven by how much restaurant operations continue to be disrupted due to health risks and associated restrictions, it not surprising to discover the restaurant experience being delivered to guests in those places that are facing the most challenges is likely less than ideal and not what restaurant operators work hard to provide their guests.

Safety and Hygiene Is Paramount

Safety and hygiene is mission critical. A recent national consumer survey conducted by Bureau Veritas found that consumers are still very cognizant about safety and hygiene standards, finding these to be fundamental factors when considering which establishments to visit.

This survey was a second set, conducted in January 2021. The first set was conducted in July 2020, and overall results were similar – underscoring that consumer demand for safety & hygiene is still significant, even after the height of COVID-19. Key findings from this survey of 1.6K consumers include:

“No matter who wins the chicken sandwich wars or which chicken sandwich is competing with the burger, operators who put chicken sandwiches or burgers or both on their menus are headed in the right direction,” says David Portalatin, NPD Food Industry Advisor and author of Eating Patterns in America. “These sandwiches have always been and will always be a customer favorite.”

“The number one request I’ve received over the past twelve months is to forecast what the future of foodservice might look like,” says Vince Sgabellone, NPD foodservice industry analyst.“In this ever-changing environment, I am reluctant to make many firm predictions, but here is one that you can count on. The popularity of burgers is going to continue for many, many years to come. Not even a global pandemic will change that.”

Amid COVID-19 lockdowns and quarantines, dine-in restaurants (that remain in business) embracing take-out and delivery, and sporadic shortages inhibiting an earnest return to the kitchen, the results of the fifth Coast Packing Company/Ipsos Research Animal Fats Study reflected the topsy-turvy time that commenced in March 2020.

The 2021 iteration of the survey from Coast polled 1,005 adults nationwide on their attitudes and consumption patterns around animal fats – and found little change in consumer opinions and behavior.  As in Coast’s original baseline survey, conducted in November 2015 and revisited annually since, respondents were asked whether they were more or less open to animal fats and whether those views extended to actual behavior.  The 2019/2020 Coast-Healthy Fats Coalition (HFC) survey replaced the 2019 wave.

In the latest survey, it appears that no news is news: people’s attitudes toward animal fats, as well as their consumption of animal fats, were reported as being unchanged in recent years at a higher incidence rate than in all four of the prior waves.  The findings suggest that pandemic restaurant closures may have put a damper on people seeking out a different diet, a trend that holds true for the general adult population as well as for younger respondents.

“Nearly a year on, it’s clear that pandemic has disrupted habits throughout ‘normal’ life, not the least of which was what and where to eat, and with whom,” said Eric R. Gustafson, CEO, Coast Packing.  “As our latest Coast/Ipsos survey shows, COVID effectively put the resurgence of traditional animal fats on pause.

“That said, consumers indicated that they understand that animal fats are a net positive for health and well being,” he said.  “We were again pleased by the insights and thoughtfulness expressed in the verbatim responses.  However the pandemic has affected their communities, today’s consumers value authenticity and want food that is made with integrity and respect for culinary traditions.  That’s why the natural makeup of both lard and tallow matter so much.  These products are best when minimally processed, which is consistent with the entire thrust of food and cooking right now.”

The survey included a question aimed at eliciting open-ended responses from a subset of the sample: “Why are you more open to animal fats in your diet?” Verbatim feedback, which skewed toward men and younger respondents, revealed a range of insights about increased openness to animal fats:

“Using this type of food allows you to have special food moments amidst a mostly healthy and balanced diet.” (male, 38, South)

“There are lots of benefits to eating saturated fat.  Bad cholesterol is a myth, there is enough info out there to prove that saturated fat is a good vessel for transporting healthy fat to the heart and surrounding organs.” (female , 39, Midwest)

“I feel animal fats are better for you than processed fats.” (male, 52, West)

“During times of hardship and uncertainty, consumers gravitate to comforting and familiar products and flavors,” said Sian Cunningham, senior marketing insights specialist at taste and nutrition company Kerry Group, in SmartBrief/Food & Travel.  “As more consumers are preparing food at home, they are seeking out meals and desserts with classic flavors — mac and cheese, pizza, brownies and s’mores, for example — to provide that sense of comfort and normalcy.”

“Restaurant payroll software can help save time and reduce errors,” says Christelle Feniza, Communications Manager of Digital.com. “Our expert guide makes it easier to find the most reliable systems and identify the pros and cons.”

Interested in finding the cocktails that leave us the most defeated the next morning, experts at OnBuy Drinks created a Cocktail Hangover Index. The linear numeric scale scored each hangover element, such as headaches, sickness and time wasted in bed, on a scale from one to ten. With the results, OnBuy.com was able to discover which cocktail caused the worst hangover.

Coming in at a close second, the classic vodka-based Sex On The Beach scored 6.9. This cocktail will leave you with intense cravings for greasy carbs during the hangover phase with a factor of 10. This fruity number also scored second for time wasted in bed (9hrs).

In third, Long Island Iced Tea (LIIT) has an overall hangover factor of 6.8. It scores highly across three out of five of the factors; headache (8), dehydration (8.6) and sickness (6.4). This cocktail contains equal parts vodka, tequila, light rum, and gin. It is widely known that mixing alcohols is more likely to bring you to levels of intoxication, so arguably, it is surprising that LIIT doesn’t take the top spot.

Of the listed cocktails, it is the Mojito that had the least after-effect, scoring 4.6 in the hangover index. A minty mix that scored amongst the lowest for time wasted in bed, at just three hours wasted. A great drink for all of the fun and almost none of the post-drinking regret. However, it does come in as one of the highest scorers for dehydration (6.7)

Followed closely by the spiced tomato staple, the Bloody Mary, scoring 4.7, and the Strawberry Daquiri scoring 4.8. The Bloody Mary is amongst the cocktails that give you the lowest cravings for greasy carbs (3.2) and time wasted in bed, again at just three hours wasted.

Strawberry Daquiris are fruity and sweet and scored relatively low for all the hangover factors. 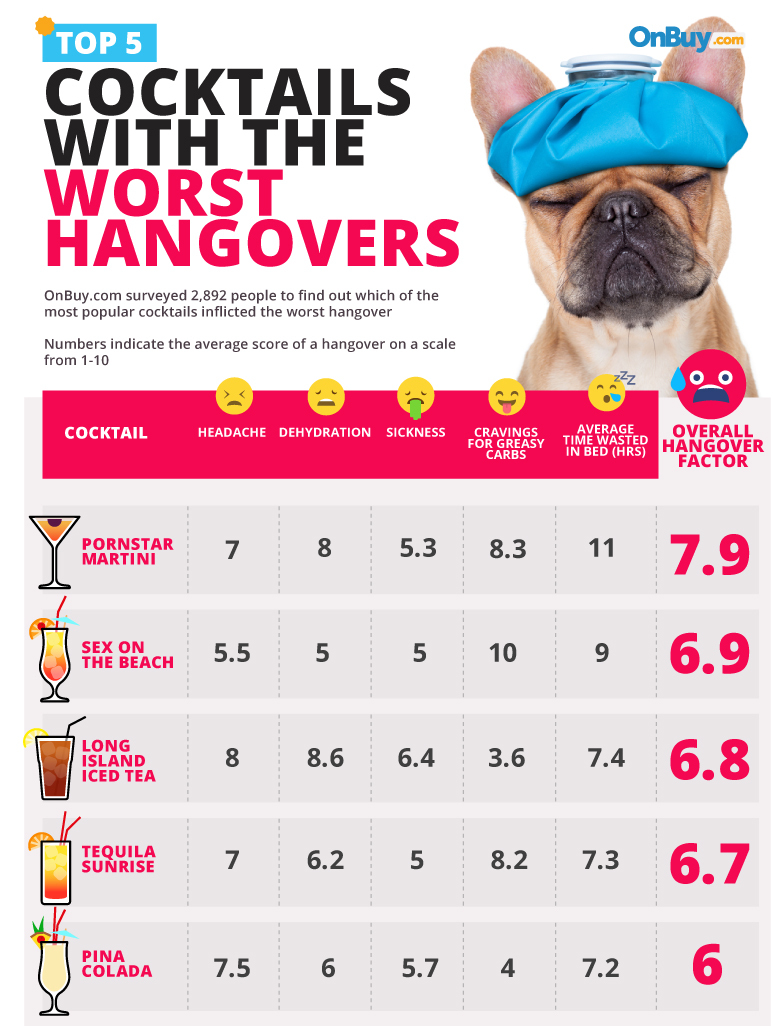 To achieve the data, OnBuy Drinks surveyed 2,892 people to find out which of the most popular cocktails (as determined by Google search) inflicted the worst hangover.

From the survey results, OnBuy.com created an Index of common factors experienced during a hangover. Each factor was ranked on a linear numeric scale from 1-10.

Additionally, an experiment was led whereby a selected group of individuals drank the previously listed cocktails to the point of inebriation – drinking six cocktails within four hours (mixing cocktails was not prohibited). The individuals completed the survey.