Factorylux, a UK manufacturer of architectural and design lighting, used the ST Robotics R12 industrial robot to mix cocktails at the London Design Festival using nothing but audio frequencies.  The result of this new sound and light installation was ‘Cocktails & Robots’, a  human/robot encounter made possible by acoustic science.

“We’re a small and new lighting design manufacturer who was looking to disrupt a saturated market,” commented Factorylux Co-Founder Stanley Wilson. “We had been throwing small parties for designers and we found the most cost-effective, the most standout and successful strategy was to serve cocktails. We encountered ST Robotics, whose unique approach of affordability, allowed a small company like us to successfully implement our first robotic project. The increased activity and interaction of our guests at the impressive ‘Cocktail and Robots’ display exceeded our company’s branding expectations.”

Factorylux’s idea for the ST Robotics Cocktail Robot was inspired by English Musician and Composer Delia Derbyshire.  In the early 1960s, Derbyshire created one of the first television theme tunes — Doctor Who — entirely by electronic equipment from the BBC Radiophonic Workshop.

ST Robotics’ collaboration with Factorylux in the field of robotic and intelligent vending systems represents a growing market segment that is projected to reach $11.84 billion by 2025.

Gordon Ramsay  celebrated the official grand opening of the first-ever Gordon Ramsay HELL’S KITCHEN restaurant at Caesars Palace in Las Vegas. Since its soft opening in early January, the  restaurant has already received reservations for nearly 25,000 guests. In other news, Gordon Ramsay Steak is scheduled to open at Harrah’s Resort Atlantic City over Memorial Day weekend. 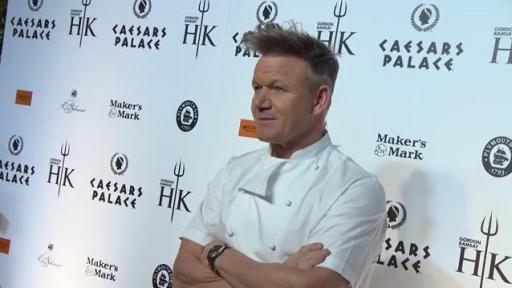 Designed to be an experiential and immersive destination restaurant, guests at Gordon Ramsay HELL’S KITCHEN will feel transported to the studio set of the FOX television show. The inspiration from the hit show is evident from the signature fiery pitchfork – direct from the set of the popular TV show – that marks the entryway, to the life-size video screen of Chef Ramsay that greets guests upon arrival, to the chef uniforms and menu items.

“We responded to fans of the show who were hungry for a real-world HELL’S KITCHEN restaurant for some time – pun intended,” said Ramsay. “What we didn’t fully realize was just how enthusiastic the response would be. We are thrilled with the reservations and interest since announcing our opening, and excited to welcome guests to experience the best of HELL’S KITCHEN – great food, and great cocktails.”

Designed by Jeffrey Beers International, the first-of-its-kind restaurant boasts design features that are engaging to all senses and are a nod to both the red and blue teams featured on the show. The dynamic and bustling kitchen is the centerpiece of this unique eatery, with mosaic tiles framing the open space artfully, allowing guests to appreciate from every seat in the house. Chefs and cooks in the kitchen will be in the exact uniforms from the show – red and blue jackets with coordinating bandanas. To further bring the electric atmosphere of the studio into the dining room, additional key elements of the show are infused in the design, such as fire and heat and custom designed lighting that combine brass rods with pitchfork features and runs across the high ceilings. HELL’S KITCHEN’s iconic “H” and pitchfork symbols are cleverly featured throughout the custom-designed, laser-cut screen partitions and soft charcoal and ash-hued wallcovering.

“Creating unique and world class-dining experiences is one-way Caesars Entertainment is strengthening the integrated resort concept,” said Mark Frissora President and CEO of Caesars Entertainment. “A key element of this is building strong partnerships and Gordon is not only a great partner but also one of the biggest talents in culinary.”

Several of the most successful signature menu items and recipes featured on the television show can now be experienced during lunch and dinner including Pan Seared Scallops, Lobster Risotto, Beef Wellington, Truffle Arancini, Brick Pressed Chicken and Crispy Skin Salmon.

“With Gordon and his team, we created a unique dining experience based on one of the most popular shows on television. I’m very proud of what we have achieved. The room has been transformed and feels just like the set of Hell’s Kitchen, and the food and service is worthy of the Gordon Ramsay,” said Gary Selesner Regional President Caesars Palace. “The response from guests so far has been very gratifying. They are delighted with the menu and love the concept. It looks like we have another big hit on our hands. I can’t wait for everyone to try it.”

Ramsay will bring his first steakhouse concept to Atlantic City this summer.

“I couldn’t be more pleased to introduce Gordon Ramsay Steak to Atlantic City,” Ramsay said. “Since first opening Gordon Ramsay Pub & Grill at Caesars, the city has quickly become a true dining destination. I can’t wait for Gordon Ramsay Steak to make its mark on the culinary landscape with a concept that will offer guests the best dry-aged beef, finest seafood and freshest locally-sourced ingredients in a uniquely warm and comfortable setting.”

“We are thrilled to once again partner with one of the world’s preeminent chefs, Gordon Ramsay, on a world-class dining concept here in Atlantic City,” explained Kevin Ortzman, Regional President for Caesars Entertainment.  “The debut of Gordon Ramsay Steak at Harrah’s Resort this summer, added to our already stellar lineup of restaurants, including Gordon Ramsay Pub and Grill at Caesars, will continue to raise the bar and further evolve the dining landscape in the city, marking our second concept by the multi-Michelin star chef.”

Ramsay’s vision for the restaurant is reflected in the dishes on the modern steakhouse’s menu. Gordon Ramsay Steak showcases prime beef dry-aged for a minimum of 28 days and cuts such as the 32-ounce Royal Long-bone Chop for two as well as American Kobe. With a nod to his British roots, Ramsay has expanded on the traditional land and sea offerings and developed a menu that is both distinctive and creative. Ramsay’s Beef Wellington and Sticky Toffee Pudding dishes, which have been popular items at Gordon Ramsay Steak in Las Vegas and Baltimore, will be signature items on Ramsay’s Atlantic City menu.

Toast is partnering with Izzo’s Illegal Burrito Group, which includes the group’s namesake 16-location fast-casual Mexican restaurant and LIT Pizza, an eatery with locations in Baton Rouge and Gonzales, Louisiana. Toast now serves as the company’s point-of-sale (POS) system at all Izzo’s and LIT pizza locations.

“Having used a legacy POS since inception, we decided a cloud-based system was the right choice to help us continue to scale and serve delicious burritos, pizza and more to our loyal customers,” said Ozzie Fernandez, co-founder and CEO at Izzo’s Illegal Burrito Group. “Toast stood out as a partner that will lead innovation in the restaurant technology industry for many years to come.”

Cali Group launched face-based payment pilot program at CaliBurger, its restaurant operating subsidiary, in Pasadena, California where the Quick Serve Restaurant chain showcases new technologies developed by its parent company. The program, which will be available to the public on Tuesday, January 30, enables the customer to pay with a glance at the camera without ever needing to swipe a credit card. In late 2017, Cali Group launched face based loyalty login on its large format self ordering kiosks. Customers login to their loyalty accounts at the self ordering kiosks without needing to type in any identifying information.  Now, in addition to accessing their loyalty account by looking at the camera on the kiosk, customers can also complete the transaction by looking at the camera.
“The positive customer reaction to face based loyalty login at the kiosks encouraged us to quickly deploy face based payments at the kiosks,” said John Miller, CEO of Cali Group. “To our knowledge, this is the first time in America that customers in a retail environment can pay without needing a physical or digital wallet.”
Privacy and security are a top priority for Cali Group.  Cali Group’s face based system requires a two-step authentication process. In addition to smiling at the camera, the customer will also need to enter a 3-digit CVV number from their credit card to process the transaction.  Longer run, after demonstrating that face based authentication of payments is significantly more secure than swiping credit cards, Cali Group plans to eliminate the entry of the CVV number and only require a smile to authenticate the transaction.
“NEC is a leading innovator in delivering retail technologies and solutions from the point of sale to the back office and beyond,” said Matt Worley, Vice President of NEC Retail Solutions. “Cali Group’s face payment technology powered by NEC can be used to reinvent the customer experience and reduce transaction costs for merchants.”
Face based payment is a component of Cali Group’s unified C-Vision™️platform, which ties together software products developed by Cali Group’s affiliated companies to enable the entire restaurant to be controlled from one operating system run on a tablet.  If customers are pleased with the new ordering and payment experience, the face-based payment feature will be rolled out to CaliBurger’s global locations.

To focus on the development of the next generation blockchain food traceability and control application, Romana Food Brands Corp. will change its name to Romana Food Blockchain Corp.
“The popularity of Bitcoin and other cryptocurrency, such as Ethereum, is not surprising due to the great underlying blockchain technology which enables the coins.” said Morrie Fogelbaum, Chairman of Romana Food Brands Corp.  “Using the same blockchain protocols, and designing a new approach to traceability, Romana will be able to capture a significant portion of the growing $16 billion market.”
According to the company, the food supply chain is the most complex and fragmented of all supply chains. Production is found all over the world both on land and in water. Many producers and intermediaries are difficult to identify and track. This creates uncertainty and risk. The next generation blockchain food traceability and control application is key in establishing reliable provenance and preventing fraud and counterfeiting. Romana’s blockchain will include information on conditions at the production facilities, tracking of food items, and volumes in the supply chain, to name a few features.
“Romana’s development of the next generation blockchain for Food Traceability and Control is a true catalyst to sustainable shareholder value” said Fogelbaum. “Romana’s blockchain solution will not only provide our food operation a competitive advantage, but the licensing of our blockchain technology to some of the leading brands of the world will enable Romana to become a market leader.”