A comparison of year-over-year foot traffic rates across different dining subcategories reveals they are all experiencing a slow but steady recovery, according to the latest data from foot traffic analytics platform Placer.ai.

“Unsurprisingly, the hardest-hit dining segment was sit-down dining, which saw a dramatic drop of around 40 percent in year-over-year visits during the winter months,” said Placer.ai’s Maytal Cohen. “In contrast, QSR chains, which tend to fare well during periods of economic uncertainty and benefit from high off-premise sales and takeaway services, have been performing relatively well, seeing a drop of only 25 percent to 30 percent in year-over-year visits during those same months.” 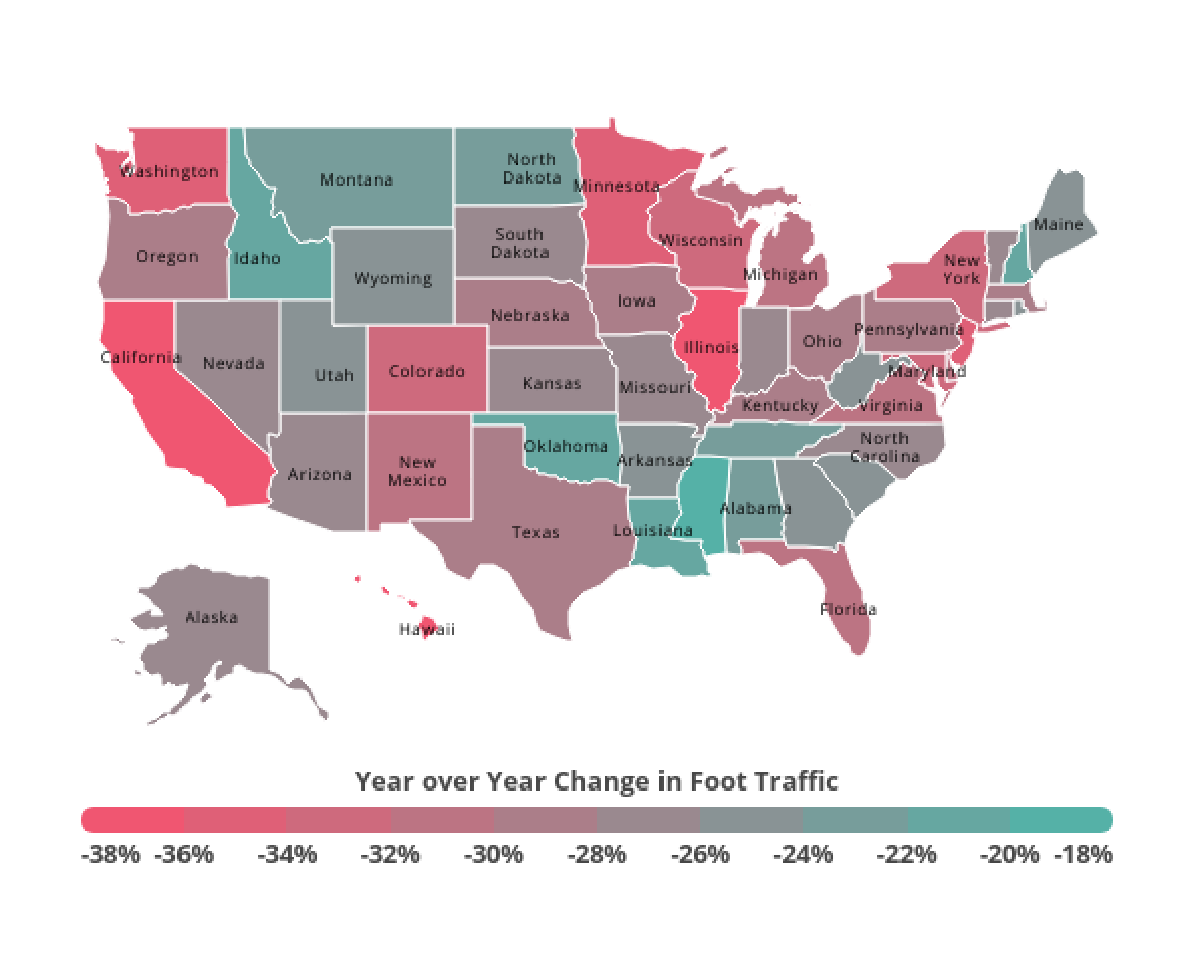 The coffee segment also saw an impressive recovery, with similar year-over-year visit rates to those of the QSR category. Location data also showed that despite the sector’s overall positive recovery trend, the winter of 2021 brought with it another small dip in year-over-year visits across the four analyzed segments. However, there is hope that the sector’s recovery will continue to climb at a powerful rate, as more customers eat outside due to warmer weather and the vaccinated population grows.

While an overall recovery is undoubtedly en route, its magnitude is expected to differ across states and regions. Declines in restaurant visits have been highest in states centered around high-density urban areas, like Illinois, California, and New York, with year-over-year visits in those states down by 38.1 percent, 36.1 percent, and 32 percent, respectively in 2020. In contrast, lower populated states like Mississippi and New Hampshire have had milder drops, with year-over-year visits down by only 17.7 percent and 20.3 percent.

“Besides population density, tourism and travel have a significant impact on the local dining scene,” said Cohen. “Restaurants in major cities like New York and Los Angeles were the first to get hit once business and pleasure travel was limited since they rely heavily on tourists.”

One of the most significant pandemic-related trends that had a huge impact on retail, dining, and work was a suburban migration pattern and the geographical change of countless Americans’ centers of living and working.

“As many people moved to the suburbs from major cities and city centers lost much of their power due to the new ability to work from anywhere, city- and suburb-located restaurants were forced to adapt in different ways,” Cohen noted. “And while this downward trend in cities is likely short-term, suburban locations could leverage this larger visit potential by upgrading their sit-down component or enhancing customer experience to lengthen visit duration. This would be especially true should flexible work arrangements prove sustainable, even if only in part.

But even with these called-for adaptations, location data has shown a considerable gap in the foot-traffic recovery rate of city- and suburb-based restaurants. A comparison of year-over-year visits of thirty central Starbucks branches across Los Angeles, Chicago, and Washington D.C. with thirty other suburb-based branches around those cities showed that the suburban venues had far outperformed the city locations.